Some of Indigo’s art gets tossed. Some gets framed and hung on the wall. Some, she tries to toss but we rescue. And some, none of us wants to keep or discard, so it goes into a pile for me to photograph some day. She’s actually getting quite good about photographing it as she goes, but I still have a boxful from her earlier years, and I am finally digitizing it.

A few nuggets from last night’s round:

First or second grade. I love the sand at the bottom of the ocean, and the way the partial coloring of the sky makes it look like something huge has just sent up a splash. Maybe it was a whale.

First rule of pre-printed paper: fill in the O’s, D’s and R’s.

Indi went through a phase when she made a lot of lists like this. Maybe an expansion of a school exercise? I will translate.

–I have two very good moms.

–I have two ears one nose two hands two eyes and one mouth.

–I have seven caves. (Ed. note: neither she nor I knows what she meant by this. I suggested that it might mean “orifices,” as in the old joke about having seven holes in one’s head, but she was sure she hadn’t heard of any such thing. My Spanish dictionary doesn’t give any figurative meaning for “cueva”: just “cave,” pure and simple.)

-I have a lot of stuffed animals. 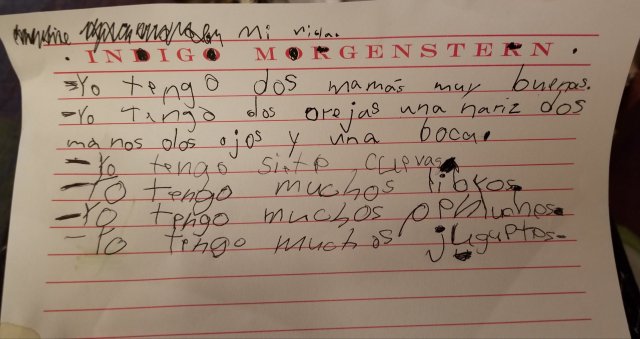 Sometimes she just listed words. This page is headed, “Words in English and Spanish.”

A photo from an Our Family Coalition event. I love what she wrote on top. Nas = nice, which is a logical guess.